Heart Rate Variability and Why You Should Care

We used to think we could measure our circulatory health with a combination of blood pressure and heart rate. Low measures indicated healthy arteries, veins and heart.

However, recently researchers have begun to realise that there is another interesting and powerful measure of the strength of your nervous and circulatory systems and of your health in general. This measure is called heart rate variability (HRV) - and it turns out to be a better indicator than the more traditional notion of heart rate. HRV is increasingly being considered as a long term biomarker of health. Reduced HRV is associated with a number of ailments such as diabetes, cardiovascular disease, inflammation, obesity and psychiatric disorders. Conversely, increasing HRV can have a direct effect on capacity to exercise, promote weight loss, and positively affect mood, sleep, and recovery [1].

So what is HRV?

Simply put, HRV is the variability of the time between consecutive heart beats.

It turns out that healthy hearts do not have a consistent heart rate at all - so measuring the beats per minute doesn’t tell you everything. Your heart will regulate its beating to meet your body’s demands on an ongoing basis right down to the level of consecutive beats. So even as you breathe in and out, the interval between beats is changing in response to different levels of oxygen in your lungs.

HRV attempts to capture this by measuring the time between each heartbeat and measuring the degree to which this varies. To work this out, the exact moment of each heart beat must be recorded (down to millisecond precision) over a period of time that may range from at least 10 seconds all the way up to 24hours; then some clever maths is needed to convert this information into a single score for your HRV.

There are several different ways that this HRV score can be calculated, and for those of you who are more mathematically inclined, look out for our next post which will dive into a more in-depth analysis. For the rest of us, however, we don’t need to worry so much about how HRV is calculated so long as we can interpret the numbers and understand what it tells us about our health.

How is HRV linked to health?

Your heart rate is controlled by your Autonomic Nervous System (ANS), which is the part of your nervous system that works without direct conscious intervention from your brain. It is still signals from the brain that are controlling every beat of the heart, but it happens largely without you thinking about it or having much control over it.

The ANS actually has two branches which work in an opposing but complimentary fashion to keep the body in a balanced state, referred to as homeostasis. The Sympathetic Nervous System (SNS) branch stimulates the body in response to internal or environmental stressors. Activation of the SNS has the effect of preparing the body for what is sometimes referred to as it’s ‘fight or flight’ response. Heart rate and blood glucose levels are increased, pupils dilate and breathing quickens, while healing, digestion and reproduction systems are inhibited.

The Parasympathetic Nervous System (PNS) works in exactly the opposite direction and is sometimes referred to as the ‘rest and digest’ response of the body. It works to bring your stress level back down, slowing heart rate and breathing while stimulating digestion, healing and relaxation.

The ‘fight or flight’ vs the ‘rest and digestion’ description of these two branches is not a wholly accurate one, however, because it gives the impression that there are long periods when one is dominant over the other. But far more accurately, both are constantly active and attempting to keep the body in a balanced ‘homeostasis’, even when engaged in either fighting or relaxing.

Both branches are active even as we breathe in and out, with the SNS working to increase heart rate (along with other bodily functions) while the PSN is working to bring the heart rate right back down. Hence it is the strength and vibrancy of our nervous system that we are measuring when we measure our HRV.

In other words, HRV is a proxy for measuring the health of your autonomic nervous system. Dysfunction in the ANS can have severe implications on the body’s ability to exercise, heal and fight disease.

That said, it’s also important to understand that HRV is not a direct measure of the health of the nervous system so even if your HRV varies, it doesn't necessarily mean that something is wrong. It’s best to get a longer term picture of your HRV and use it with other metrics to get an overall idea about your health.

What is normal HRV?

It’s very difficult to come up with an exact definition of what is normal, but scientists have studied population averages and give ranges that are common by age and gender. Below is a graph of HRV ranges from one such study [2]. 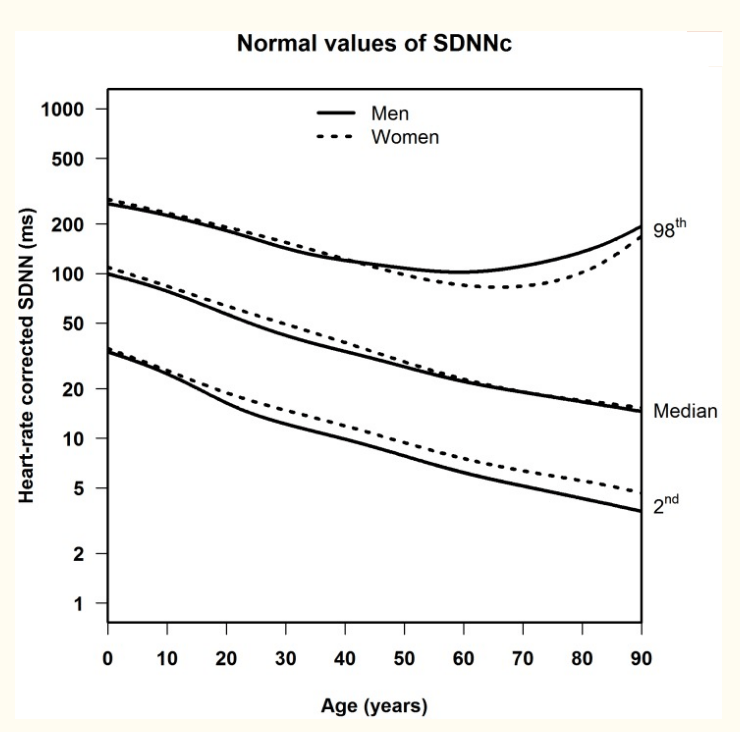 As you can see, HRV tends to fall as we age and there is a considerable range.

HRV can fluctuate for an individual quite a lot even within a single day. Factors such as the amount of exercise you have recently done, how well you slept, how recently you ate and how stressed you feel can all have short term effects on your HRV. It is, therefore, generally considered better to examine the trend of your HRV and understand the different factors that can affect it. Long term trends are affected by health, diet, fitness, stress and age.

But generally speaking, within the ranges given, the higher your HRV at any age, the better. Your HRV will also increase after strenuous exercise and during recovery until it returns to your long term baseline.

Some good apps exist that can be used along with a regular heart rate monitor (such as polar or simply your phone camera), to get a measure of your HRV trends.

How to improve your HRV

If you do measure your HRV and find that it is a little on the low side for your age and gender, there is no need for immediate despair. There is a great deal you can do about it.

Given all the things that affect HRV, the ways to improve it all revolve around improvements in the same things: regular exercise, good sleep, good diet and limiting stress.

Additionally, ensuring that your nervous system is healthy and functioning as it should is very important. The vagus nerve is directly connected to your heart and good vagal tone is strongly correlated to good HVR. Stimulation is a good way to improve the tone of your vagus nerve, but there are also many natural ways that you could use. Look out for future posts where we will explore this.

Even if you decide to use stimulation to help maintain or improve your vagal tone, you should still always consider combining this with natural methods. Many of these methods will have a positive effect on your overall health and well being as well as your HRV.

Getting On Your Nerves

For all the right reasons